Home Books Book Launch: How Can Tourism Thrive in the Post-Pandemic World?

The impact of the global pandemic has resulted in unprecedented disruption, with the tourism industry among the hardest hit. One of the most important sectors in the world economy prior to COVID-19, accounting for 10 percent of global GDP and over 320 million jobs worldwide, returning to pre-COVID levels is a process expected to take several years. The economic impact has been particularly significant for some of Europe’s most popular destinations, such as Spain and Croatia, where tourism accounts for 12% and 11% of GDP respectively according to the UNWTO Tourism Dashboard. 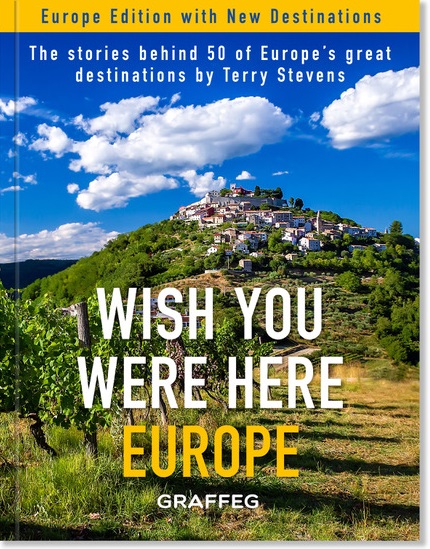 Major affected tourist centres, such as Spain’s Barcelona and Bilbao and Croatia’s Rovinj, Mali Lošinj and Zadar, feature in this follow-up edition to Wish You Were Here, in which award-winning tourism expert Terry Stevens introduces 50 of Europe’s best destinations, discussing the strategies and successes that have allowed each to consistently deliver world-class visitor experiences and the view ahead to recovery in a post-pandemic world.

The pressing issue of how to achieve the safe return of visitors while curbing the environmental implications of international travel has been to the fore during the recent COP26 conference, where travel bosses stated that tourism should ‘move rapidly away from carbon- and material-intensive ways of delivering visitor experiences, instead prioritising community and ecosystem well-being’.

The immediate challenge is to bring about a halt to rising pollution, with emissions from tourism up by more than half between 2005 and 2016, with many of the most popular hotspots themselves threatened by rising sea levels and biodiversity loss, which ultimately reduce visitor numbers and the sustainability of the destination.

Terry Stevens guides the way through the successes of 14 new European destinations here: West Dorset, Bergamo, Bordeaux, Brda, Vyoske Tatry, Cornwall, San Sebastian, Terme Olimia, Trieste, the Wadden Sea, Cardiff, Basel, North Pembrokeshire and Malta. Each of the 50 entries receives a personal and insightful look into its history and character, the various factors that have contributed to making these places of note over the course of centuries, as well as the more recent developments and innovations that have been implemented to make them inviting for visitors today and to be prepared for the future.

For his work with the Slovenian Tourist Board Terry Stevens recently received the title of Ambassador of Slovenian Tourism 2020, adding to other recent recognition as LUXLife Tourism Destination Management Development Expert of the Year 2020 and the LUXLife Tourism Expert of the Year Award in 2021, demonstrating his unwavering dedication to the industry during a historically challenging period.

Wish You Were Here Europe was published on the 26th November and is available from www.graffeg.com
…